Have you played in Canada’s ocean playground before? Well, if you’ve been to Nova Scotia, then most likely you have – at least according to the local license plates there baring the title for the picturesque coastal province.

If you find yourself heading there one day, here are just a few great ways to play in Nova Scotia’s ocean playground, all within a short drive from Halifax. 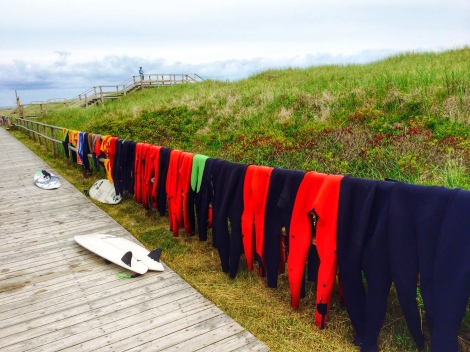 There’s lots of great swimming beaches in Nova Scotia but if you really want to play in this playground, I recommend heading to Lawrencetown Beach and trying out the surf.

Lawrencetown beach is very near to where I grew up (just a 20 minute drive). It’s a beach that I visit EVERY time I go home. I’ve done a lot of beach walking, soul-searching and wave jumping here over the years but I had never surfed…….until now. Just a few weeks ago I finally wriggled into a wet suit and strapped a board to my ankle. 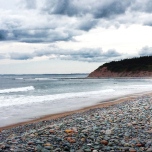 A friend of mine, another local, joined me in taking a surfing lesson one morning when the tide was low and the surf was “cooking”. It’s a bit of a head scratcher to me when I think of how long its taken me to try surfing. I’ve wanted to do it for years but always thought I needed to try it in some hot, southern location. I blame the ‘travel me-home me’ paradox I’ve been battling. I’ve spent years saving all my adventures for the times when I’m travelling or vacationing instead of taking advantage of opportunities to have some of those experiences closer to home. Ridiculous! A few months ago the absurdness of that type of faulty thinking finally came to light for me (for more on that click here.) and I’ve been determined to start living an adventuress life full-time ever since. And so, into the ocean I went, surfboard in hand.

There are a number of surf schools that operate out of Lawrencetown Beach. We went with East Coast Surf School for our lesson and had a great experience. Our awesome instructor gave us a quick safety lesson on rip currents, undertows and general beach and surf safety and then demonstrated how to position ourselves on the board and catch a wave. I’ll admit I took an unreasonable amount of time trying to decide if I was a lefty or a righty when it came to what my leading foot should be?? I’m left-handed but you’ll be pleased to know that I (finally) determined that I’m a ‘righty’ when it comes to surfing. We practised the motions on the sand a few more times before heading into the surf.

Of course, someone inevitably asked ‘the question’ as we were wading in with our boards – “Have sharks ever been seen at this beach”? Ugh! That hadn’t even crossed my mind and now it was emblazoned on it. Thanks a lot. Word of advice – if you’re heading to a group surf lesson and you’re nervous about sharks, ask the questions BEFORE you get in the water (in private!) so you don’t have to freak everyone else out too. I pushed it aside and tried to concentrate on remembering everything the instructor just taught us. If today was the day a shark was going to visit Lawrencetown Beach then it was going to have to visit me too because I wasn’t putting off surfing for one….more….second.

I was so determined to get up on a wave that I exhausted myself by attempting wave after wave. I figured it was simply a matter of getting a feel for it all and then eventually the odds would be in my favour, right? Right! After many wipeouts, bails and missed waves, I got up! For a few glorious seconds I was surfing. When I jumped off the board at the end of my short run I was ecstatic! You’d have thought I’d just won the lottery.

The toll of all the botched attempts left me completely spent by the time we finished, but crossing surfing off my ‘life goals’ list was very rewarding and I will definitely try it again (and again and again). I’d also recommend it to anyone else who loves playing in the ocean. 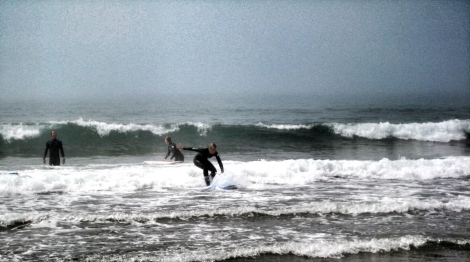 No surprise here. Peggy’s Cove is an extremely picturesque fishing village perched along Nova’s Scotia’s south shore, just an hours drive from Halifax. Home to over 160 historic lighthouses – some of which are world famous – Nova Scotia’s best-known lighthouse is undoubtably Peggy’s Point Lighthouse (often referred to as Peggy’s Cove lighthouse). Nestled on top of huge wave-washed rocks next to fishing wharfs and colourful homes dotting the rocky landscape, the whole scene creates a postcard perfect picture in any direction, no exaggeration. And if you’re lucky, you might even get ‘piped’ in by a local bagpiper welcoming visitors to the iconic lighthouse. 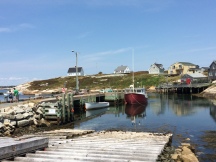 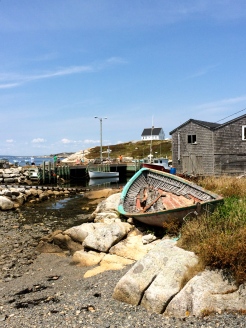 As you drive along the coastal road approaching Peggy’s Cove the landscape changes dramatically. Forests lead way to a rocky low brush and then all vegetation disappears as you arrive. Gigantic smooth boulders characterize the area – a striking visual reminder of the relentless crashing waves. It’s a stark but beautiful scene. Exploring the rocky landscape with waves crashing, sending salty spray up into the air is all part of the Peggy’s Cove experience. 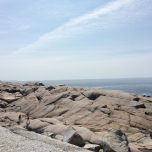 What you don’t want to experience is the full force of those waves. Growing up in Nova Scotia I recall stories every summer of naive tourists getting too close to the waters edge and either slipping on the wet rocks or getting swept in (and under) by a rogue wave and a changing tide. Peggy’s Cove is a little spot where nature and all its elements are on full display and must be respected. 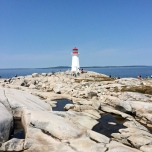 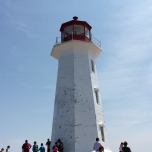 For the full experience you must head into the Sou’Wester, the restaurant/gift shop located beside the parking lot. Lots of local dishes are served up here including fish and chips, seafood chowder, lobster, fish hash & chow chow and warm gingerbread. It’s one of only a few spots to stop for a meal so try and visit off peak times to avoid a crowd.

Peggy’s Cove is a ‘must see’ in Nova Scotia and a beautiful place to sit and absorb the fresh air, coastal views and listen to the crashing waves.

3. Hiking the cliffside trail at The Ovens Natural Park

Picture a rocky cliff rising high above the sea with waves crashing upon it and a spectacular trail winding along the cliffs edge. This is the scene of The Ovens Natural Park. It’s quite a different scene from the smooth boulders of Peggy’s Cove but the power of the ocean is equally evident here. Years of crashing waves has created natural sea caves (or ‘Ovens’, as the place draws its name) that can be viewed from the trail.

It took about an hour and a half to arrive at The Ovens from Halifax but it was well worth the trip. We fuelled up at the little restaurant on site – Miners Diner – and then headed down to Cunard’s Beach (located at the bottom of a set of stairs off of the parking lot) to try our hand at gold panning. The Ovens also happens to be the site of an old-time gold rush that occurred back in the 1860’s. We saw lots of families sifting through layers and layers of beach rocks searching for their fortune but ultimately we (and I suspect, ‘they’) came up empty-handed – surprise, surprise. 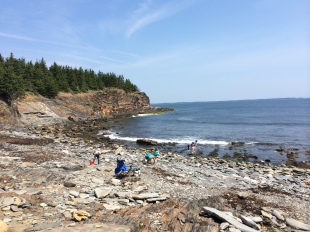 The trail to the sea caves starts right off the main entrance and its a beautiful one. Although not difficult, you do need to be sure-footed and watch your step as there are many tree roots crossing the path, steep narrow steps leading down to the caves and only simple wooden safety railings. Every step offers a gorgeous view and the caves can be admired from the top of the cliff, from viewing platforms near the waters edge and from right inside a few of them. 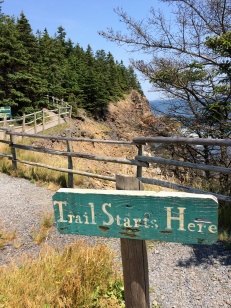 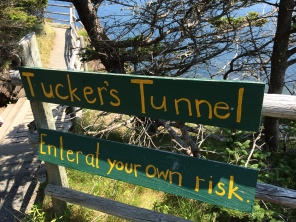 The trail itself doesn’t take too long to complete and then it circles back to the start but if you’re like me, you’ll end up spending lots of extra time just sitting at various spots along the trail and taking in a few good lung-fulls of the fresh salt air and staring out at the sea. I can tell as I write this that I must sound very nostalgic for the sea. I think I am. I miss living near the ocean. It has a draw for me like the flames of a campfire – I can’t take my eyes off it but I’m not quite sure why.

Of course there are dozens of unique places in Nova Scotia where you can really play in this ocean playground. The city of Halifax’s waterfront itself is a fantastic spot to experience much of what Nova Scotia has to offer. But the next time I’m back in Nova Scotia, I’m planning to ride the famous tidal bore. What’s that? Well, you’ll just have to go to Nova Scotia to see for yourself. Don’t wait for me to experience and write about it, go play!

One response to “Playing in Canada’s Ocean Playground: Nova Scotia”