The enormous stained glass skylight of the concert auditorium in the Palau de la Música Catalana in Barcelona. It depicts the sun and floods the auditorium with natural light during the day.

The Palau de la Música Catalana was built in the early 1900’s to provide a home for the Orfeó Català, an amateur choir society that still performs Catalan (and international) repertoires in the auditorium. Originally financed by the society itself and through contributions from wealthy Catalans, the concert hall is now listed by UNESCO as a World Heritage Site (1997) and is considered an icon of Catalan Art Nouveau architecture. 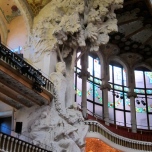 My husband and I visited the concert hall on our last day in Barcelona. We almost didn’t see it because we thought we could arrive at any time during its open hours and tour the auditorium ourselves. We were wrong. Guided tours are available in numerous languages but must be pre-booked at specific times. Self-guided visits were not available at the time of our visit (October 2013). 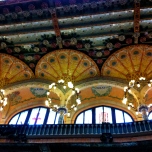 The concert auditorium is absolutely stunning and I think anyone would be hard pressed to say otherwise. Everywhere you look there is decoration, ornamentation, stained glass, pillars and busts of musical muses all surrounding the stage with its central organ. When my husband and I entered the auditorium we sat in the seats and spent the rest of our time craning our necks to take in every square inch of the spectacle. I would highly recommend a visit if you find yourself in Barcelona. You can even take in a day-time concert to experience the concert auditorium at its best.

For more information on the concert hall you can visit its website.