I owe my grade 10 history teacher an abundance of gratitude. It’s quite possible that an assignment he gave my class one day, all those years ago, ended up having the biggest impact on my life to date and contributed immensely to my love of travel. And it was SUCH a simple assignment.

He handed us each a blank piece of paper and an envelope and asked us to write “The Vanilla Ice Cream Syndrome” on the front of the envelope along with “today’s date and the date 1 year from today”. It was June 1st, 1989.

“The Vanilla Ice Cream Syndrome” he explained, “is a lifestyle syndrome in which the inflicted suffer from a very safe but mundane (boring) life because they don’t have the courage or the inclination to try something different”.

He was a history teacher but on that day, June 1st 1989, instead of lecturing about ancient civilizations and historic battles, he gave us the rare opportunity to ponder our futures. He asked us to write down 10 goals that we wanted to accomplish in our future and to look back at the list every year. I’m so glad that almost 25 years later, I still have that list.

I was 16 at the time so a few of the goals were a bit near-sighted and my desire to achieve them was short-lived but most of them led me towards amazing travel adventures.

Scuba dive along a coral reef.  I accomplished this goal 8 years later while on a solo trip to Australia. The Great Barrier Reef was more beautiful that I had even imagined. When I returned from that year-long trek, I checked #6 off the list.

Fly in a helicopter over Niagara Falls. I first found myself in a helicopter flying over Victoria Falls in Zimbabwe for an episode of an adventure travel TV show that I was a part of in my early 20’s. 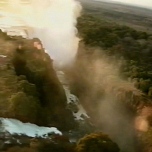 In my mind, Vic Falls far exceeded Niagara Falls so I crossed it off my list and considered it an upgrade. Just a few months later I ended up flying in a helicopter over Niagara Falls for that same show.

I’m not sure what I was thinking with goal #8 – Have Twins.  I’m a twin myself , which must have provided the inspiration, but surely I understood at the age of 16 that this was a goal that I’d have to leave to fate???  (Fate decided to give me 2 girls, 2 years apart. Fate is very wise).

The last goal – To Speak Another Language Fluently – is one that I have been working on FOREVER. It has become my life’s goal. It will likely take me my entire lifetime to be able to say that I am ‘fluent’ in Spanish but I still hope to cross it off my list, even if I’m 86 when I do it!

Vanilla is a safe bet. It’s a predictable and pleasant flavour. Why risk trying pistachio or rocky road ice cream only to find out that you can’t stand it when you’ve got good old faithful vanilla? Sticking with vanilla sounds like the wise choice…..until you consider the flip-side. Trying something new could lead to discovering the most delicious flavour to ever cross your lips, uncovering talents you didn’t know you had, new friends, new hobbies, amazing life experiences and…. the unimaginable.

You’ll miss the best things if you keep your eyes shut.

With so much to gain from dodging the syndrome, how can it possibly even exist? Doesn’t ambition, lust for adventure or simple curiosity immunize us all from such afflictions? No. Many of us are shackled by fear of the unknown or of change. Some lack opportunities or role models to introduce them to options outside of their existing environment. Sometimes inertia or just not taking (or having) the time to stop and reflect on your life and your aspirations is to blame.

I’ve made a number of life goal lists since that day in 1989 and they differ greatly from this one but all of them have added so much to my life experience. I’m a big believer in the power of not only writing down your goals but in sharing them with others. It really does give them a life of their own and before you know it, you’re crossing off a goal and staring down a new one. I highly recommend it.

In just a few weeks time it will be June 1st again and I’ll be celebrating 25 years of  successfully dodging the vanilla ice cream syndrome.

So there you have it. I’ve shared my very first life goals list – the early and possibly better version of my current list. I’ve also inadvertently shared my age with those of you who did the math. If you didn’t, bless you ;) 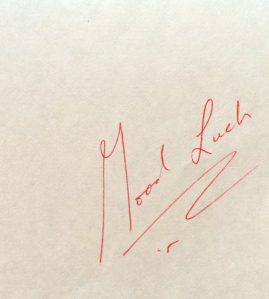