I know what you’re thinking. Parc Güell has been around for over 100 years. How can it be new again?? True, Parc Güell has been a popular site for both locals and tourists in Barcelona for MANY years, but 5 months ago (in late October 2013) it went from being a free public park to a bonafide tourist attraction with the introduction of an entrance fee (and it’s own app). It’s Barcelona’s newest attraction.

I visited Parc Güell in early October, just a few weeks before the entrance fee was introduced. As I strolled in I couldn’t help but think that history was pushing itself forward trying to restore what it had originally intended the park to be. For a place that started off with such lofty ambitions and has since earned numerous prestigious titles, perhaps its only fitting to have to pay to enter its gates. 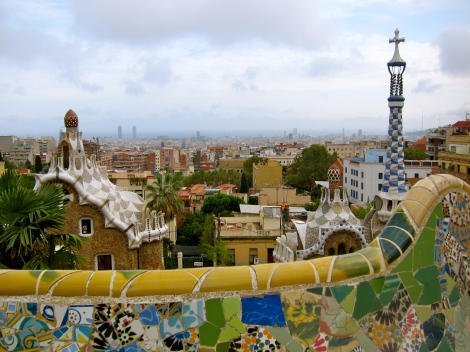 The park got it’s name from Catalan entrepreneur Eusebi Güell, the businessman who commissioned architect Antoni Gaudí to design an exclusive neighbourhood of sorts for wealthy families, providing them with a beautiful hillside estate within which to build their homes and offering lovely views of the sea. Ultimately the venture failed and the project was abandoned with only 2 of the 60 planned homes having been built. But the park began to gain the interest of tourists and when Güell passed away the park was purchased by the city. It opened as a municipal park in 1926 and over the years has earned recognition as an artistic monument and was declared a UNESCO World Heritage Site in 1984.

Standing just inside the gates of the park provides one of the best views. From here you can take in the entrance pavilions that call to mind fairytale images of Hansel and Gretal’s gingerbread house. Both are beautifully tiled and show-off Gaudi’s penchant for decorative roofs.

Just inside the entrance, a magnificent ‘double staircase’ rises up defining the entire space and creating the foundation for this hillside park. Part-way up the stairs is a striking dragon figure (which looks more like a lizard) decorated with trencadis – a mosaic created from shards of broken tiles.

Continuing up the staircase you can walk into Hypostyle Hall, an area characterized by numerous columns that hold up the large square above. On its ceiling are mosaics of the sun.

Reaching the top of the steps you enter ‘the square’. Supported by the columns below and jutting out from the hillside, the square serves as a large viewing platform from which visitors can take in the view of the sea and the city. It’s main feature is the colourful bench, covered in more trencadis, that winds its way around the entire space. 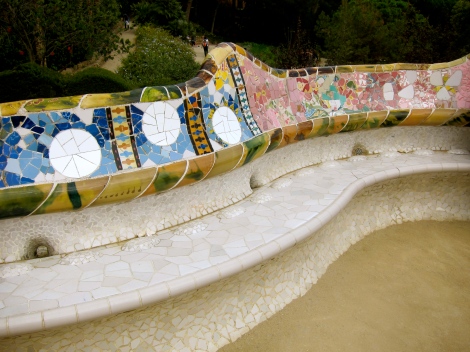 Walking throughout the park you can’t help but appreciate how well Gaudi combined his architectural design to complement the natural environment.

It’s a beautiful park and one that sees MANY visitors walking through its gates every day. I hope the entrance fee that has now been introduced helps to preserve and protect its beautiful adornments and its history.

Information about the park and its new entrance requirements (and the Park Güell app!) can be found here.

What do you think about the new entrance fee?