I’ll admit, the day DID play out like a classic comedy of errors. But although I can see the humour of it all now, at the time it felt like one miserable moment followed by another. I was kicked when I was down.

I was in Playa del Cameron (Mexico) at the time, staying at a school – Playa Lingua del Caribe – where I was learning Spanish by day and enjoying life in the Mayan Riviera by night. One Saturday I decided to play tourist and signed up for a snorkelling trip. 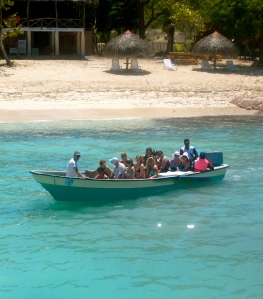 Things were off to a bad start almost immediately. The speed boat taking us out to the reef was thrashing hard on the waves and bouncing us up and down the whole ride out. I knew I was going to regret the breakfast burrito I inhaled that morning but I thought it would have more to do with not fitting into the cute bathing suits I brought with me to Mexico versus having to re-live the burrito for a second time that day.

When we arrived at the reef and anchored I felt queasy but given that I’d never suffered from sea sickness before, I put it out of my mind and dove in, keen to start exploring. Twenty minutes later I couldn’t ignore the nausea that was bubbling up inside me. I popped my head up. My fellow snorkelers, all still face-down enjoying the underwater sights, were swaying back and forth (and back and forth) on the surface of the water. Just watching them made my head spin and the nausea was rising fast so I pulled myself out of the water and back into the boat – Mistake #1.

Sitting in the empty boat only made things worse. The boat was flopping around on top of the water and stirring up my burrito along with it. I knew there were still hours to go before we’d be heading back to land. Desperate to get hold of my churning stomach, I decided to swim to the small (deserted) island in front of us. I waved down our captain, who had joined the other snorkelers in the water, pointed to where I was heading and then slipped off the flippers (Mistake #2) and dove back in.

The little island was a 5-6 minute swim away and by the time I arrived at its shore I was completely nauseated. Stepping out of the water I felt something slice into my big toe and let out a scream. Looking down I saw a crab dangling from my foot, his claw cutting into my skin. Why didn’t I keep those flippers on! Despite my efforts to shake him off, he was a persistent little bugger and dug his pincers in deeper. It’s surprisingly more difficult than one would anticipate, to loosen a crab’s grip. Eventually I managed to pry his claw open and begrudgingly let him scurry back into the ocean.

I hobbled up onto the beach trying not to get any more salt water or sand in the gash on my foot and did a quick scan for a spot where I could get out of the sun. All I wanted to do was curl up in a ball in the shade and wait for the waves of nausea to subside. 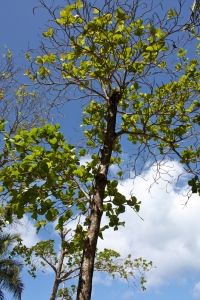 I found a log under a tree and sat down – Mistake #3. The tree was ALIVE with ants, biting ants. They were all over my legs in seconds. I jumped up and started swatting at them….more screaming….then dragged myself back out into the sun and laid down, defeated. The sun was beating down on me and a headache was brewing. I could picture my hat and t-shirt sitting on the floor of the boat I had just deserted. I was SUPPOSED to be spending the afternoon in the water, not laying in the fetal position on the beach getting burnt. My foot started throbbing and self pity was setting up camp in my brain.

A few minutes later I noticed a figure moving towards me from the far end of the beach. Squinting, I saw that it was a man and beyond him there were several other people near the water’s edge. Standing above me he told me that they were in the middle of a photo shoot of sorts and that his nude models were uncomfortable having someone else on the beach watching. My brain took a few seconds to register what he was saying. He was kicking me off the island!

That was my breaking point.

Sea sick, crab cuts, ant bites, sun burnt and now this guy wanted to send me back out into the water where it all began. It was time to pull out the gong and end this miserable show. I’m not particularly proud of what I did next but it happened, so I went with it. I started to cry. Full-on runny nose, gasping for breath, crying. He stood there, clueless. I must have looked completely pathetic. After a few minutes he turned around and walked back to his group and I resumed my fetal position.

A few hours later I pulled myself up from the sand and joined the other day-trippers for the ride back. I took every over-the-counter drug I had when I got back to my room and then turned off the lights and fell asleep. The gong show was (finally) over.

6 responses to “The Mexican Gong Show”