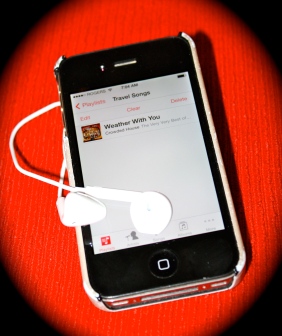 I used to worry that as time went on I might start forgetting the details of some of the special travel moments I had back in my 20’s. But recently I discovered something that not only put those worries to rest but also helps me get through my travel droughts.

I was driving in my car when a song came on the radio that INSTANTLY transported me, in my mind, to a seat in a pub in Darwin, Australia. I can’t even describe how vividly I was able to recapture everything from that moment 15 years ago. I was sitting in the pub with a handful of other backpackers. We had just returned from a rugged weekend camping trip in Kakadu National Park. A fantastic cover band was playing and I was enjoying a much deserved pint. The band started playing the song Weather With You (by Crowded House) and then the ENTIRE pub started singing along. It wasn’t the MOST amazing experience I’ve had but for some reason, in that moment, it felt really special. Hearing that song again on the radio, I could picture the booths in the pub, see the band up on the stage and hear the crowd singing again. I could even remember how totally happy I felt in that moment. That was the power of my ‘travel song‘.

In fact, I have a number of songs associated with a special travel memory and listening to them brings me back to those moments better than any diary entry or photograph can.

Here’s a sampling of some of my travel songs thus far. Don’t judge me by these songs. Some I CHOSE to listen to and others were more of a ‘when in Rome’ kind of thing.

1. Chumbawamba’s song Tub Thumping – I heard this song every single morning while on a Contiki tour travelling throughout New Zealand. It was our morning wake-up song.

2. Chi chi wa – This song has me sitting in the audience (watching my girls perform on stage) during the nightly kids ‘mini disco’ show in EVERY SINGLE all-inclusive resort in a Spanish-speaking country that we’ve EVER visited. I don’t know what the song is about or where it came from but it definitely has the monopoly on the resort circuit. And it stays in your head for a looooong time.

3. Lionel Ritchie’s Dancing on the Ceiling – I heard this song just one time while in Thailand. I had just arrived with a few friends onto the island of Ko Samui and we hitched a ride into town with a local in his jeep. The sun was shining, the song was blaring on the radio and we were on our way to a little slice of paradise for the week. I was singing at the top of my lungs.

4. Weather With You by Crowded House – Brings me back to that pub in Darwin every time.

5. Sarah McLaughlin’s entire Surfacing album – I listened to this album a lot when I spent a month picking grapes in Mildura, Australia. I was trying to earn enough money to buy a plane ticket to Perth. The accommodations were ‘rustic’ and I needed to listen to music to fall asleep at night and block out the sound of the large bugs that were crawling everywhere.

So, I’ve decided that from now on I need a travel song for EVERY trip, vacation or get-away that I go on. When I return, all I have to do is unpack and add a new song to my playlist.

I think I may have just put an end to my souvenir sagas.

Do you have a song that brings you back to one of your favourite travel moments? Let me know in the comment box below.

8 responses to “The travel song”