Sometimes I question my maturity level and even my depth of character when I find myself whispering “so, ummm….how long do we have to look at it before we can go?

I know I’m not the only one who has travelled many miles or paid a hefty entrance fee to marvel at a natural wonder/tourist attraction only to be MORE THAN READY to leave just 5 minutes later. Its usually not the attraction itself thats disappointing but rather something about the ‘how & when’ its experienced. I’ve personally lived through a number of travel disappointments. Here’s a few that come to mind right now but I’m sure there are others:

Its not that I don’t appreciate how almost impossible it must have been to actually carve those presidential busts into the rock face. I do. Maybe its because I’m not American …or maybe its because there was NO ONE there when we arrived but the truth is, my husband and I spent more time in the gift shop picking out his Mount Rushmore-themed Christmas ornament souvenir than we did staring at Mount Rushmore itself. I couldn’t get enough of the tumbleweeds rolling across the highway during the road trip to get there but once we were standing in front of it…10 minutes and I was ‘good’.

I know this is one of Copenhagen’s biggest tourist draws and I’m actually quite fond of the sculpture and the story behind it. A gift to the city from brewer Carl Jacobsen, the sculpture was inspired by Hans Christian Andersen’s fairy tale about a mermaid who gives up her underwater life to be with her Prince on land. Jacobsen saw a ballet production of the story and fell in love with the character. The only reason I didn’t give much time to this welcoming harbour landmark is because of the hoard of people that were surrounding it making it difficult to enjoy (or even see!) the rather small sculpture.  The much less well-known mermaid at the Carlsberg brewery across town was MUCH easier to enjoy.

Ok, in my defence I actually DO admire Antoni Gaudí’s amazing feat of gothic architecture and feel that it deserves (and requires) A LOT of time to be fully appreciated. Its just that the lines to enter were sooooo loooong the morning I visited and the exterior was covered in scaffolding – as it has been, and will continue to be, for many years. I think I’ll return to Barcelona and La Sagrada Familia in 2026 when it’s anticipated to finally be completed (construction originally started in 1882) in commemoration of the 100th anniversary of Gaudi’s death. THEN, I will stand in the line and be more than happy to marvel at its unobstructed beauty, all day long. 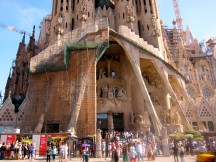 Yikes! I didn’t even take a picture when I was there. I’ll admit, I’m not much of a history fan and I’m already starting to regret not learning more about the historical significance of some of the places I’ve visited.  The disappointment here was due largely to the weather and time of year that I visited this popular Icelandic tourist destination. Pingvellir plays a big role in the history of Iceland, marking the site where Parliament was first established in 930 and is one of the 3 main tourist attractions in the well-known Golden Circle. It was foggy, raining and cold when I visited the park. If I had been able to hike through the rift valley or snorkel in its clear Silfra lake then I would have thoroughly enjoyed my visit. But I couldn’t, and I didn’t, so I was disappointed. Truthfully, I didn’t even know about all that the park has to offer when I visited. Clearly I hadn’t done my homework so I have only myself, and the weather, to blame.

12 responses to “So, ummm…..how long do we have to look at it? Travel disappointments”